Whenever I log into facebook these days, probably a good quarter of my feed is in Romanian (thankfully my lessons are going well and my textbook arrived the other night!).  This recipe for cotlete ardelenesti popped up in my feed about a week ago and I made it on Monday night. 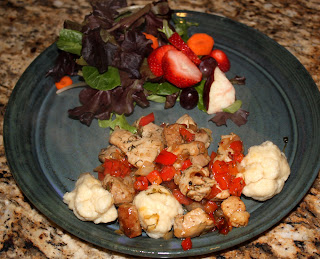 Brown the cubed pork in oil; remove and saute the peppers and onions in oil until the onions are translucent.  Add pork back into the pan.

Make dumplings - the recipe I originally was using was confusing on this; in the ingredient section it said to use 2 eggs and a bowl of flour, and in the directions it said 3 eggs, and still no actual measurement for flour.  My guess is that the author figured people making this would already know how to make dumplings, but I've actually never made them before, so I poked around on the net to find dumpling making 101.  The recipe I came up with was for 3 cups of flour, 3 eggs, 1 tablespoon of salt and 1/2 cup water.  Mix all ingredients together and drop by rounded spoonful into boiling water.  Boil for 10 minutes.  This produced very tough, dense dumplings that the kids loved, but I was not thrilled with.  Insight from A, who has never had dumplings in anything other than soup, but has made them for that purpose several times - skip the flour and use farina instead.  Will try that next time!

The verdict: Once again, a traditional recipe A has never had.  I seem to be *very* good at finding those :P  But everyone liked it, and with different dumplings, it will go into our dinner rotation .

Posted by Holden's Landing at 5:33 AM No comments:

Dinner, to go with the zacusca 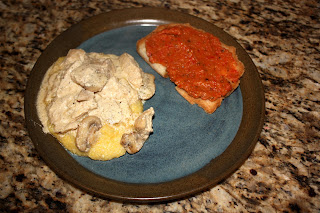 Brown chicken in oil; remove from pan and set aside.  Brown a half pound of mushrooms in 4 tablespoons butter.  Add chicken, 1 cup of sour cream and salt and pepper to taste.  Serve on mamaliga.

The kids will have nothing to do with sour cream, so to avoid having to make two dinners, I removed a portion of the mushrooms and chicken from the pan before adding the sour cream for them.  They just ate it plain and were very happy.  H actually tried a piece with the cream, but said he didn't like it.
Posted by Holden's Landing at 4:15 AM No comments:

To say A is particular is like saying it's a little on the chilly side in Siberia in winter.  Or that it's kind of damp in the ocean.  You get the picture.

A few months ago, A's parents brought us a jar of zacusca.  It sat in the cabinet for a while, with A saying he hated zacusca.  his father stayed with us one weekend and wanted it for breakfast, so we popped open the jar ... and the 2 of them proceeded to devour the entire thing in a few minutes flat.  Apparently A does not, in fact, hate zacusca.  It's just that he only likes this *one* zacusca.  This week he even tried another at his parents' house and hated that one too.

So I had an eggplant.  And some peppers.  Carrots.  Onion.  Which means *I* should make zacusca, right?

There are abotu 5,987,492 recipes for zacusca on the internet.  Eggplant, pepper, mushroom, fish (anything that involved fish and a food processor is not happening in this house, no matter how traditional it may be), summer, winter, harvest ... you name it.  And the recipes are all contradictory - for the same amount of eggplant and peppers, the oil amounts differ from 1/4 cup to 1 litre.  So I did what I normally do ... I made it up as I went along.

I printed out what I would use as the method.  Then I commandeered the remains of the jar of zacusca we had in the fridge and used the order of the ingredients list to determine how much of everything to put in.  This is what I came up with:

Zacusca
1 eggplant (1 lb 8 ounces)
3 red peppers (1 lb 8 ounces)
3 medium sized carrots, peeled and chopped into coins (about 10 ounces)
11 ounces of chopped onion
1 tomato (8 ounces)
3 bay leaves
salt and pepper
oil (preferably sunflower, but we were out, so I used olive, which gives it a different taste)

Roast eggplant and red peppers.  Remove skins; let eggplant drain.
Sweat the onions in oil with the bay leaves until translucent.  Remove bay leaves.
Boil carrots for 10-15 minutes, until they are tender but not mushy.
Put everything (including the tomato) in the food processor and whirl until chopped/combined.  Add salt and pepper to taste.
* About the salt - I didn't think that the jarred zacusca was very salty.  Until I tried it side by side with the completely unsalted homemade version.  To get my zacusca to the same level of saltiness, I had to add way more salt than I would have liked, about 3 tablespoons.

The verdict? It's *almost* right.  It is so very, very close.  It is liked by A, but not as much as the jarred one we have in the fridge.  So I will try it again.  What will I do differently?
(1) More eggplant.  Even though the jarred version has red peppers as the first ingredient, indicating there is more red pepper than eggplant in their recipe, the eggplant flavor stands out far more than in my version.  So the amount of eggplant needs to be adjusted a bit.
(2) Roast the tomato.  The jarred version has a very tomato pasty smell which mine does not have.  It's March, and the tomatoes are not very good, which is one problem (can't wait to try this when the garden is in full swing!), and the tomato really added no taste.  It needs the richness of roasted tomatoes or of a homemade tomato paste.
(3) Pulse the carrots, tomato and onion in the food processor first, with the salt and pepper, then add the eggplant and peppers so that there are some small chunks of both in the finished product.

Overall, I'm happy with it.  It's delicious.  I just have to get it *right* 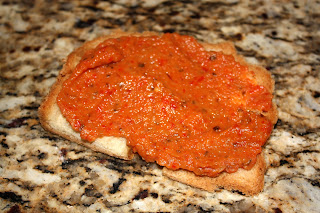 Zacusca, on homemade bread
Posted by Holden's Landing at 4:09 AM No comments:

My issue with trying to find Romanian recipes is that it's hard to weed out the traditional recipes from recipes that just happen to be written in Romanian.  I have given up on pre-translated recipes; I have thus far found them all to be either (a) poorly translated or (b) Americanized, or both.  With the exception of Roxy's Kitchen - hers is the one English language Romanian blog that I go back to.  Now, it's easy to weed through some of the recipes, like when I find recipes on a "Traditional Romanian Foods" blog for things like "Pui Kung Pao" ... um, no.  Not traditional Romanian food.  Or recipes that call for margarine or prepackaged things, because back in the day (or even now), I know A's mother would NEVER be using those ingredients (and they're not something I would be using either).

So it's a consistent problem for me.  I look through recipes and see what I can find that *looks* like it would be a traditional recipe, and then I make it and A has never had it or even heard of it.  But at least we're trying some good new foods!

Last night's recipe was for porc cu sos de mustar cu mamaliga.  I finally got the mamaliga part down pat - you'd think that boiling water, corn meal and salt would be easy.  Apparently not - it would either be too runny, it would burn, etc.  A told me his trick the last time we had it and I tried that this time and viola! Now I can cook mamaliga like a pro :P

I made the pork first and separated some out for the kids.  They don't like sour cream, so I made K some honey mustard (which she deemed just as good as the honey mustard from TGIFridays, lol) and H dipped his in ranch dressing (one of the only things I still buy premade; note to self: need to start making ranch dressing for the kids asap!).  And every time we have mamaliga, I put a teeny tiny dab of it on each of their plates and they look at it sideways and leave it there, but this time, H ate his and said his mouth must not be working because he really couldn't taste anything. 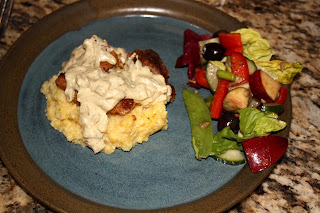 Up next, I'm trying my hand at zacusca - now, THAT I know is traditional!
Posted by Holden's Landing at 3:44 AM 2 comments: 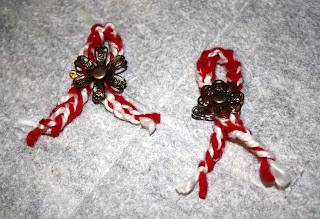 The kids and I tried our hands at making martisor for the family today
Posted by Holden's Landing at 2:08 PM No comments:

If I ever want my kids to eat Romanian food, all I have to do is make snitel.  2 weekends ago, a made it for us for the first time and I barely got any dinner - he and the kids ate it quicker than the kids could pronounce it.  Tonight was my turn; I made twice as much, just in case. 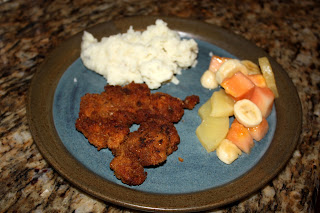 Possibly the easiest meal I will ever make, but also one of the most time consuming.  I don't fry anything ever, so this is something I wont' make frequently (much to everyone else's dismay!), but it is definitely one i will make again.

Directions:
Using a mallet, pound pork cutlets as thin as possible, without them falling apart. Set aside
In a bowl, beat eggs with a little water; set aside.
In a shallow bowl or tray, mix breadcrumbs with the spices (to taste).  Set aside.


Assembly line fashion, dip each pork piece in the egg/water mixture, then dredge in breadcrumb mixture.  Set aside on a plate.  I like to have all of mine dredged before frying.

Heat oil over medium heat.  Fry each piece  for 1-2 minutes per side, or until the pork is cooked through.   Drain on paper towels.

Serve with mashed potatoes.
Posted by Holden's Landing at 4:22 PM No comments:

Last night was chiftelute, take 2.  I spent about an hour online looking up different recipes and none of them looked quite right.  Thankfully, as I was just starting, A came home from work early and gave me some pointers. 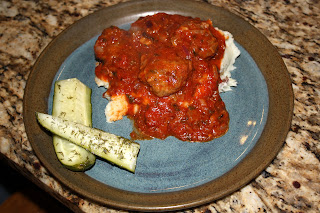 This time he said I nailed it ♥

Directions:
Heat oil in a pan.  Saute diced onion until translucent; add garlic and saute 1-2 minutes more, until it is fragrant.

In a large bowl, thoroughly mix the ground meat with the egg, breadcrumbs, spices and onion and garlic by hand.  Shape into balls and flatten into patties.  Dredge each patty in the flour, then fry in oil. Set aside to drain.

For sauce:
In the same pan, heat some more oil and saute another onion (diced) and 2-4 more cloves garlic (diced) as above.  Add to that 28 oz crushed tomatoes, 6 oz tomato paste, 10 oz water and salt and pepper to taste (I used 1t each).  Bring to a simmer and add meat.  Let simmer about half an hour.

Serve over mashed potatoes, and with picked cucumbers.

* Our pickles are homemade quick pickles - cut a cucumber in half, then quarter each half into spears.  Place in a container with equal parts water and vinegar, 1T garlic salt, 1T dill and pickling salt.  Cover and refrigerate.  I made these the night before and they were very strong the following night at dinner time.

The verdict?  Kenna loved it.  Holden ate the potatoes and said the meat was funny (although how he figured that I am not sure since he didn't taste it).  A said it was just right.  This goes into the dinner line up for sure.

Tonight? Romanian schnitzel.  A made it 2 weekends ago and the kids could not get enough of it.  Tonight, it's my turn to attempt it!
Posted by Holden's Landing at 7:03 AM No comments:

Visit my other blogs

21 Chicks and Counting - our life starting a small farm